Inspiring the Filmmakers of the Future

That’s a wrap folks! To check out films from this school year – check out our portfolio here for a selection of the works or see them all on our youtube channel https://www.youtube.com/channel/UCjl4_UGDTEf87wzi8z7D7Kg?

From everyone here at the DFA, we wish you a creative and restful summer!

See you in September! 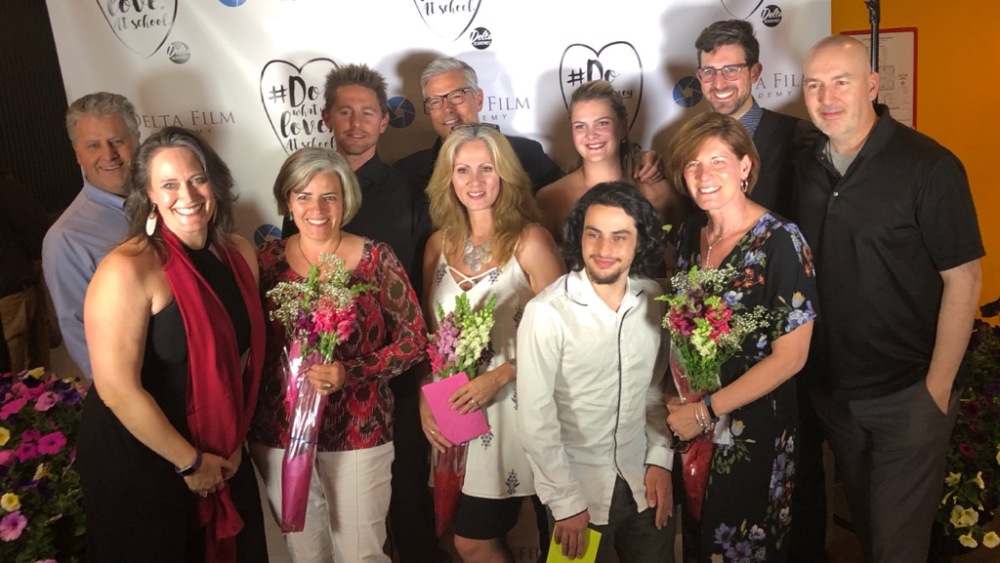 Come out to see our students latest works from the 2018/2019 school year on June 21st at 6:30pm! There will be light refreshments, a red carpet, awards and of course screenings from our filmmakers in our Film Acting, Film Production and Visual Effects Academies! Come out to the South Delta Secondary School’s Equinox Theatre and support our AMAZING students!

This year we want to begin the update with a warm welcome of the VFX academy into our Delta Film family! So far, we’ve already collaborated to create composites and ball animations with our newest instructor to our team Jim Hebb. We are so excited to expand our student’s learning into this huge industry in our city under the leadership of teacher coordinator Braeden Saucy. We welcome back Cameron Bancroft as the primary instructor at the Film Acting Academy as well as Sandra Almond, Jason Mills and Garnet Campbell for the Film Production Academy. I am still here, but with a new name! Jennifer McKee is now how I am known and I am the Teacher Coordinator of the Delta Film Academy.

Already this year we have written new stories and soon to come are 30 individual 60-second films, monologue close-ups and 18 mask films. Stay tuned in our portfolio section to see a sampling of these projects and more!

A huge thank you Alex Zahara, Viviane McConkey, Bob Habros and alumni Yale Shi and Nathan Young for being our special guests the last couple months!

at 6:30pm for refreshments

The festivities will be held

Admission is free with donations accepted at the door.

Leanne Rae Podavin (Thirteen Ghosts, X2, X-files, Supernatural) took some time out of her day to show the kids at the academy what SFX makeup is all about! With a bit of hands-on stuff after her lesson, the academy kids are looking quite creepy for Halloween! Thank you Leanne!

Come out on Wednesday, June 15th at 7pm at Delta Manor Education Centre for our GALA SHOWCASE! We will be screening many of our works from the year including the greatly anticipated short film “The Wastelands” in addition to Kama Sood’s “The Test” and Kate Chubbs “Soul Girl”! We are thrilled to share our work so invite one and all to join in the celebration! See you there! 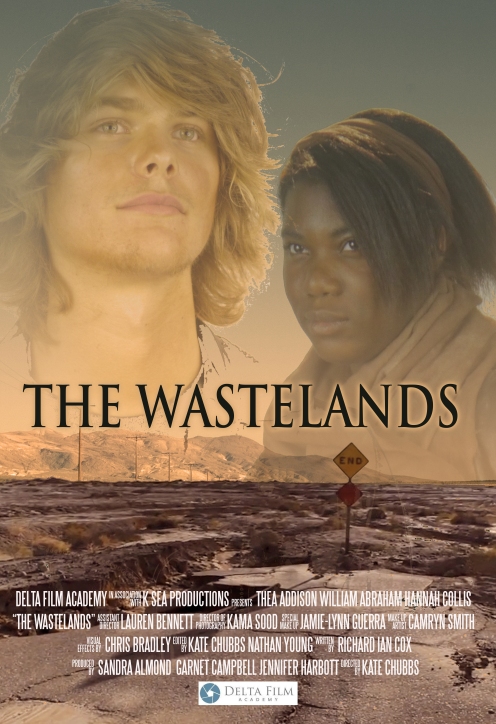 Just last week, we had the honour of having Academy Award nominated VFX supervisor Robert Habros, and VFX coordinator Neil Impey of Point Break at our school!

Thank you for the invaluable words and wonderful presentation, gentlemen. 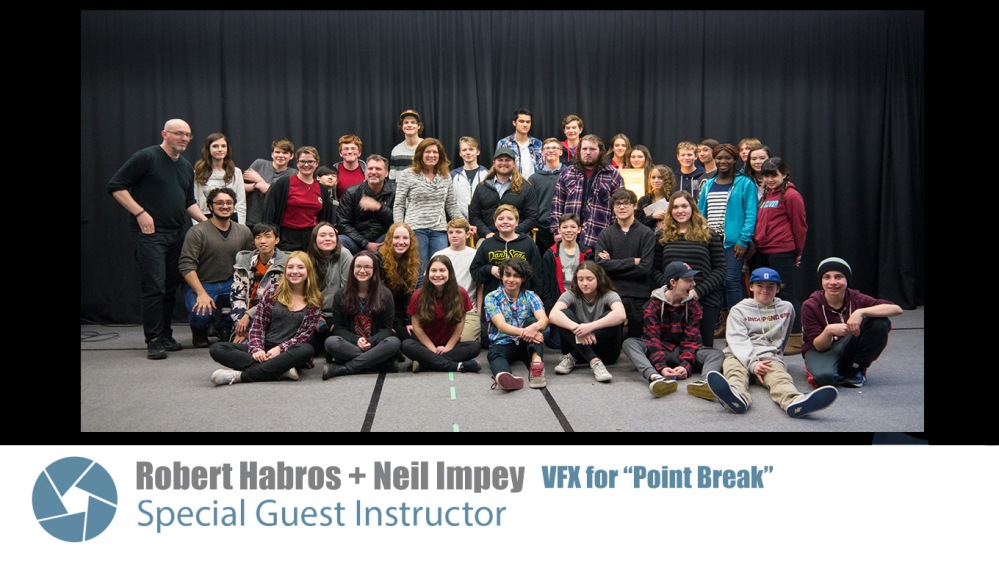 We’ve had a fantastic launch to  the school year here at the Delta Film Academy! Already great work has been created by our students and we are excited to see the future for these artistic film makers. Production students have been diligently working at creating their own one minute short film narrative projects under the expert guidance of Garnet Campbell and Sandra Almond. The actors have been steadily building their skills and confidence on camera with their specialized instructors Richard Cox, Alex Zahara and Cameron Bancroft. In addition to visiting the set and participating in a live taping of “Some Assembly Required”, we also had the luxury of welcoming some of the cast into our studios for an intimate panel interview. A big thank you goes out to Travis Turner, Dylan Playfair, Harrison Houde and special guest star Mackenzie Gray for inspiring and sharing some of your passion with us. We also want to thank Simon Jori for sharing some of his camera talents with our production students in a specialized workshop and Ashley Foreshaw for demonstrating and teaching us some FX Makeup techniques to use in our films. Furthermore, a big thank you to Rob Kirbyson for sharing with us the trials and revelries that Directing projects in the industry presents. We are so honoured to welcome such passionate professionals to our space and continue to grow and learn as a community of storytellers.

Also new this fall, we welcomed a new member to our family of instructors! We sadly said goodbye to Braeden Saucy as the Production Assistant of the film academies, as he has moved on to further film study at Capilano University, and welcomed Mo Barrett onboard. Mo is a recent grad of Langara College’s Film Production Program and we are absolutely thrilled to have him here. His passion challenges the students in their craft!

Overall, a stellar start to the year with many more learning moments on the path ahead. Look for our upcoming creative projects to be posted and our work for the Delta Burns Bog Conservation Society. We can’t wait to see what’s in store through the winter!

Wow! What a season so far for the Film Academy! We have had many opportunities and welcomed aboard several big names into the academy to share their expertise. The acting students have been lucky to work with Alex Zahara, Cameron Bancroft, Jane Hancock and Michael Soltis as guest instructors in the last several months. The students have risen to the occasion to be challenged in their craft by these instructors and had lots of laughs in the process! In the Film Production Academy we have welcomed Nicholas Boughen from CG Masters School of 3D Animation and VFX and Simon Juri to the school to bring new light to our students camera skills and editing skills. We were also thrilled to roll out the DFA’s first Public Service Announcement (PSA) piece “Game On” educating our district about Delta’s new recycling program! Check this piece out at https://vimeo.com/116282252!

At the moment we are in the thick of marketing both the Film Acting and Production Academies, with course registration upon us. We have just hosted a very successful and fun “Day at the Academy” where we invited Grade 7 students to join us in class for a day. Furthermore, we have two weekend Open Houses, one in the North Delta (March 7th at Burnsview 10AM-1PM) and one in Ladner (Feb. 28th at Delta Manor 10AM-1PM), to provide information to parents and students about the Film Academy. We invite you, in your journeys around Delta, to share the Film Academy program information and suggest people check out the open houses and our website for more information! Thank you to all the students, parents, administrators and instructors who help out at these community events and take the time to share their personal experiences with the program! We also hope that you stay tuned to the roll out of our new promotional video featuring testimonials from students and instructors and snap shots of our work.

In light of this, I wanted to take a minute to answer some frequently asked questions that we have been getting about the program. These questions mostly have to do with students who are currently attending their first year of the program and are wondering what the program consists of next year. Will it be the same? What will students learn in second year and beyond?

The Delta Film Academy is open to students from Grade 8 through Grade 12.  A student could potentially be enrolled in the Film Academy throughout all five years of high school as long as they are interested in growing in their craft as a film production or acting student. As it is with most explorations in the arts, a continuation within the program means that students are constantly expanding and layering on skills that they have previously learned and taking further risks within that to develop their craft. In production, for example, if a student in first year learned all about the basic skills for lighting a scene on camera, in second year and beyond they will be given more opportunities to do inquiry and project based learning to play with lighting and troubleshoot situations as you would do on set in a “real-life” work situation. In the acting stream, the students that come back beyond year two are given more challenging scripts to work with and often have more opportunities to work with the production students to create engaging film performances.

In summary, the program accommodates students of different levels so that each student has the opportunity to grow and learn, from each other and from the instructors, so that they are all equipped to go out into industry and share their imagination and story through film!

For more videos, photos and information check out our website and social media and so much more by following the links below.

We were super happy to be able to host a Q&A with a few members of the cast of Some Assembly Required. Take a look at a few of our favourite moments in the video below: